he's a graduate
Not that I ever doubted it : )
Michael graduated from High School last weekend.
And no.....I didn't cry.  I think it will hit me after this weekend when Taylor's 2 birthday parties are over.
She's having a family party on Saturday and a friends party on Sunday.
I'm tired just thinking about it.
We invited her whole class and we've planned carnival games and we'll have a bounce house.
I'll be the first one to try out the bounce house....thank you very much : )
We had a big shared graduation party for Michael and 6 of his friends.
My sister and her family came into town for the occasion and she did all the sweets.
Michael got to choose the deserts..... 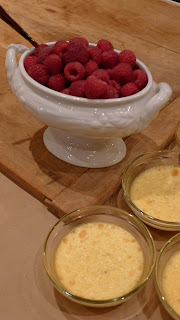 Creme brulee was top of the list.  He got to sugar and torch the tops and add the raspberries for everyone.
He thought he was a big shot : ) 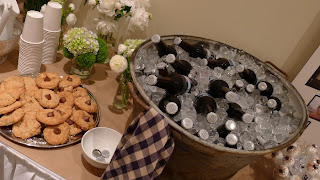 Ok....the root beer was for me.  I found the best stuff at Costco...and I'm totally addicted.
I only buy it for parties or vacations so this was the perfect excuse for me.
I used one of my big ol french tubs to ice it down.
oh...that tub looks pretty good with beer in it too : ) 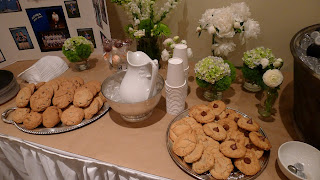 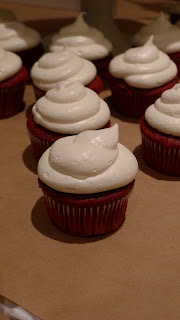 Red Velvet cupcakes were high on Michael's list too.
How cute are they??
And they tasted good too. 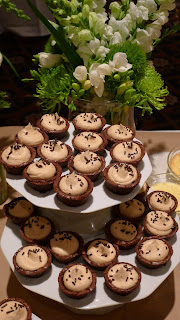 These are brownie bites with a peanut butter cream frosting.
Yikes....I had to stay away : )
They were a favorite among the teenage crowd. 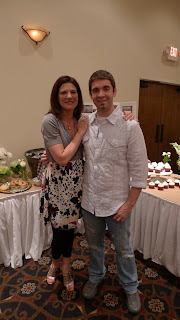 Is this me? ......no
It's my sister, Kelly and Michael.
Do you like her shoes?.....they're mine.
Do you like her necklace?.....it's mine.
Is there a picture of me and Michael?.....no
I was behind the camera all evening.
Darn it....I could just kick myself.
Oh well....we had a fun night.
The boys had a DJ later in the evening for all their friends and they kicked all us old folks out.
I wanted to stay and dance but Michael gave me a look of shock and horror.....so we left.
My husband and BIL broke out a couple dance moves.....I'm sure I saw the 'sprinkler' and the 'cabbage patch'.
I think that was the deal breaker right there : ) 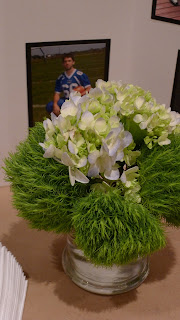 I did the flowers.  Heck...I'm always looking for an excuse to go to the florist.
They let me poke around in the cooler that's as big as my house and get what I want.
These green pom pom things were pretty cool.
I couldn't do pink girly flowers so I chose green and white. 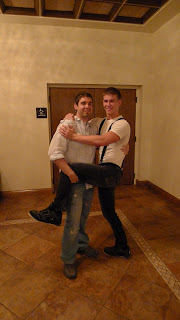 Michael and his BFF Austin.
They've been chums since elementary school.
He's a good boy and he's lucky to have a great group of friends.
ok.....now I want to cry 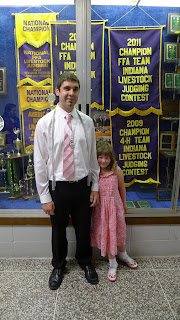 And graduation day....Taylor and Michael.
Getting pictures of him this day was like pulling teeth : )
He was ready to ditch the tie and run off with his friends so we had to be quick.
So starts a new chapter in their lives.
Taylor will be in first grade next year and Michael will be in college.
Kelly has a daughter, Lilly, that is just 7 months older than Taylor.
And Lilly is starting first grade next year also.
It just dawned on me over the weekend that the girls are going to graduate the same year.
OMG....that's going to be a crazy year to say the least.
We'll be looking back on this remembering the fun time we had at Michael's graduation. 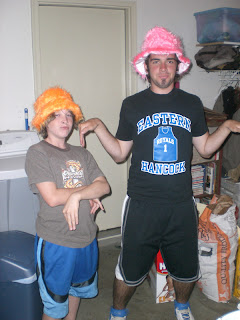 Ok....I was putting together Michael's memory boards for the party and I ran across this picture.
Please....for Pete's sake don't tell the boys I posted this.  They will throw me in the pool for sure over this.
This was when Michael was a Freshman and Will (my step-son) would have been in 8th grade.
What are they doing you ask.....well to be honest I have no idea.  I think I told them to show me their best gangsta look.....and this is all they could come up with : )
The three of us went to the county fair and closed the place down.
We ate....did all the rides and played games.
I made the boys do the ball toss game until they won me a fish.
I think it cost me about 30 bucks....turns out it was harder than it looked to get that little ball into a fishbowl : )
And we still have that darn fish.
This time next year we'll be in Houston for Will's graduation.
Two down and one to go : )
Will is flying in tonight for the summer.
We are all so excited to see him.  Once he's here our summer hits full swing.
We cram alot into the few months he's here.
First on the list is to go see Hangover 2.
Happy Stitching my friends.....I hope to get back to my needle soon
Posted by Unknown at 1:20 PM

Looks like a good time was had by all. Any chance of getting the recipe for the brownie bites with the peanut butter frosting????Please!

They are soooo good Judy...you'll love them.
So use a boxed brownie mix to make the little brownie bites. When they come out of the oven and they're still warm use a melon baller or small scoop to push the centers of each bite down to make a little seat for the icing.
For the icing....mix up peanut butter, unsalted butter and powdered sugar. Ours wasn't super sweet....just mix it until you like it. Then use an icing bag and pipe it onto each bite. We used chocolate sprinkles on ours too.
Be warned....they're addicting : )

Oh, Stacy Girl - you have me drooling on my keyboard....those sweets look and sound absolutely divine....you had me at red velvet cupcake....Looks like a fun party - love the flowers....Congrats to Michael!!! Ahhh....to have your whole life ahead of you, and the world to mold into your liking!! Smiles & Hugs ~ Robin